At work we like to think we’re on top of the laneway openings and closings near us – after all we work in property! But I must confess that Bowery to Williamsburg snuck up on us unawares.

By that, I mean it was at least a week after the initial blog posts went up on Melbourne Gastronome and MEL: Hot or Not (two of the best Melbourne food blogs out there, I’d like to point out) that we had decided – yes, this was a breakfast/lunch option worth pursuing.  After all, the reviews made mention of “peanut butter hot chocolate”. PEANUT BUTTER HOT CHOCOLATE?

Fast forward a couple of months and there are several key lime pie and New York Cheesecake addicts in the office.

Capitalising on the American food craze, the folk behind Hardware Societe in Hardware Lane (my review is here) have opened their homage to New York in an inauspicious lane (what? no street art?) called Oliver, running between Flinders Street and Flinders Lane in the east end of the CBD.

The first time I was trying to find Bowery, as it shall be known for the rest of this post, I thought I’d walked down the wrong lane – coming from the top of the hill, it’s difficult to see Bowery, all subterranean dining (well, lower than street level anyway) and subway tile.

Bowery offers a varied menu throughout the day, with bagels and a more extensive egg-based menu being the order of the light meals at breakfast time, and NYC style sandwiches at lunchtime (the Reuben!) which can come on their own ($12.50), or be served with pickles, pretzels and a side (mac and cheese, gourmet salads) ($16.50). I’ve sampled both breakfast, lunch and a little meal I like to call lunch dessert…

But I digress. Beginning at the beginning, when we had a team breakfast here – I struggle to get to the city if I haven’t had breakfast at home, so I’d already had porridge. For my second breakfast of the day, I very moderately ordered an onion bagel with dill cream cheese “schmear”. Apparently (as I was running late, damn trains) my team had already decided that was what I would have ordered, and they were on the point of ordering it FOR me when I turned up and ordered it for myself. Well, apparently you’re talking to Miss Predictable over here! 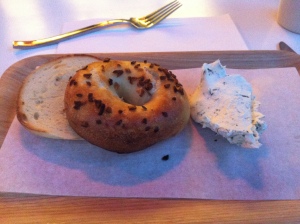 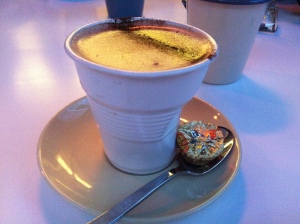 That’s a hipster ceramic version of a crushed plastic cup.

Luckily for the completeness of this blog, a couple of members of our team ordered much more interesting breakfast dishes than I did. The feedback was uniformly good (“Yum! Haloumi.”) and I’d love to come back here to have a more substantial breakfast at a later date. Unfortunately so far Bowery’s only open during the week, and … well… I have to work during weekday mornings (and afternoons, and evenings at the moment, and sometimes Sundays, am I over my job? Well, just a little!). 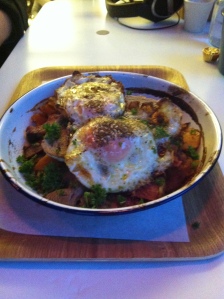 Shakshouka is the most amazing breakfast dish – I still have plans to attempt Smitten Kitchen’s version – and that haloumi comment from my coworker was a direct result of ordering the haloumi, breaded eggplant, parsley and preserved lemon shakshouka, as evidenced below. 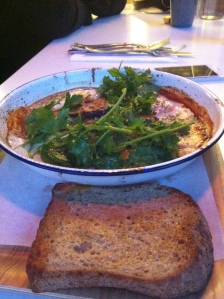 Taking photos of colleagues meals – is that weird?

The OTHER meal I’ve had here was lunch, but I was embarrassed about taking photos so I’ve only documented my lunch dessert. A friend and I split the Reuben (corned beef, sauerkraut, russian salad dressing, and swiss cheese on multigrain bread) and a bagel with lox (I’m totally in New York!) which also included dill cream cheese, beetroot horseradish, limed onion and watercress. For sides we each got the mac and cheese – totally decadent, I think it was a ratio of 80% cheese to 20% macaroni), a little pile of pretzels and a pickle.

The Reuben’s corned beef was a little stringy and got caught in my teeth, but the sheer heft of the sandwich had to be admired. I think overall this is a sanga that could have done with a little pepping up – perhaps the kiss of some hot mustard might have gone a long way to waking up the flavours inside the sandwich. Would it still be a Reuben then? Dunno.

Of the two, I guess I’m glad I ordered the Reuben just to see what it was like, but I enjoyed the lox bagel far more. When you go inside Bowery there’s a huge tray of cold-smoked salmon, and it’s just so inviting. Pair it with its long time lover dill and add some cream cheese and I’m an ecstatically happy chappy.

It’s been too long without a picture in this post so I’ll move us straight to a picture of my lunch dessert – and yes, that is a maple pecan pie, and yes, I did gorge on it at my desk, AND YOU SHOULD GO AND GET ONE RIGHT NOW TO HAVE AFTER YOUR LOX BAGEL. 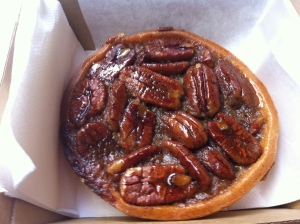 Writing this post has made me hungry – I want to go back! There’s a reason this place is rocking a 92% on Urbanspoon.