**Disclosure: I was invited to check out the new dinner menu and didn’t have to pay for my meal in exchange for an honest review**

I’ve been to Third Wave Cafe three times now – once with Kenny (of Consider the Sauce blogging fame) to sample some Russian breakfast cuisine, once with my mum to have a go at the normal breakfast menu, and now again as a table of five foodies in order to get the word out about Third Wave Cafe opening for… American BBQ dinners!

A familiar sight at breakfast for Third Wave Cafe

Fellow diners with me last Thursday were Kenny (his post about organising the event is here), Eve of Conversation with Jenny (her review is here), Bryan from Let’s Get Fat Together and reviewer extraordinaire who’s all over Urbanspoon, Nat Stockley.

Kenny and Eve tucking in to American BBQ meats

I think I’ll start with the background, which happened at the end of the night for us when Greg-the-owner came out to explain how he had decided to start opening for dinners, and the length of time and recipe experimentation it took for him to perfect his vision of perfectly smoked meats and authentic American barbecue sauces (hint: it was a long time).

Cafes also serving dinner appears to be a growing trend – well actually, so is American BBQ in Melbourne, but not exactly done well in most places from what I’ve heard, although I’m hardly an expert. Opening for dinner as well as daytime trade makes sense in order to maximise use of the cafe asset (kitchens / rent costs). Especially when you’re clearly doing very well at breakfast – why not dinner as well? And so… on to the food!

I arrived dripping wet and 20 minutes late from the awfulness of the rainy night wherein I missed several trams and was very happy to sink into a glass of Margaret River shiraz (not pictured). As soon as I arrived the initial plates of food hit the table (sorry gang!). We were served enough to have a taste of every main meat dish on the menu- cue the meat sweats.

First up were maple smoked chicken ($16 for a small plate or $29 for a large) and dry-rubbed pork ribs ($28/$53), and peas with pancetta and mint ($8/$14), coleslaw ($8/$14) for sides. They come with ah-MAZING-sauces, which Eve and I nearly forgot to put on our meats and thank god she remembered and reminded me: Apple Bourbon sauce, which was my personal favourite and Spicy Bourbon sauce – which wasn’t TOO spicy, but I just preferred being able to taste the more well rounded sweet and smoky flavour of the apple and bourbon sauce.

Flavoursome pork ribs on the bone

I really liked the chicken, actually – I’m not one to order chicken at a restaurant (apart from parmas, heh) because we eat it all too frequently at home. But, marinated and smoked for hours using maple wood, it was juicy and divine – and I got the breast portion – not dry at all! The pork ribs were also tender and fell off the bone with a push of the knife. Had I not been eating in company, I might well have picked them up to gnaw every last morsel off the bone. 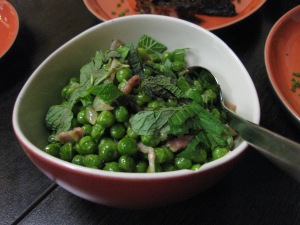 One must always order a token vegetable for meats, but these peas aren’t token when complemented by pancetta and mint

The pea and pancetta side was delicious and the coleslaw was fine – not mindblowing, but then again I make a pretty mean coleslaw at home. The sides complemented the meat really well, though. 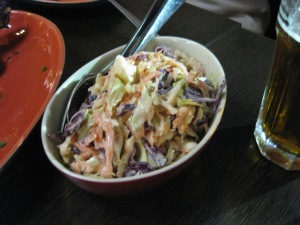 Coleslaw. In the spirit of cold war detente, Third Wave also do a very good Russian Salad if tired of coleslaw…

Salmon brined all night and smoked arrived next, along with a squeeze of lemon and a delicious dill mayonnaise ($19/$36). I am such a sucker for smoked salmon, so there was no way this large lump of salmon was not going to please me – rich and unctuous in the mouth. It didn’t really “go” with the other meats in the sense that the flavours were very different – but I’m happy it’s on the menu!

The lamb shoulder (not pictured unfortunately – how did I miss that one! $19/$36) was similarly good – tender as, and served with salsa verde. Then, our plates were cleared and Round 2 began! I was shocked. More food?!

But what kind of food it was: beef ribs (smoked in hickory, $18/$34) and beef brisket (smoked in hickory as well, but low and slow – 8-10 hours! $18/$34), along with rosemary roast potatoes (cooked in duck fat; Nigella would approve; $9/$15) and soy and sesame glazed mushrooms ($9/$15), which sounds anachronistic (soy? but it’s American BBQ!) BUT complemented the beef very well. Here’s a picture of the spread, which also came with horseradish sauce: 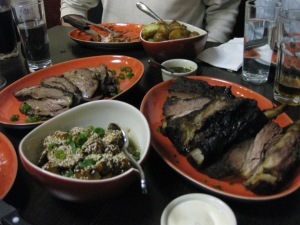 A smorgasbord of smoked meats.

The beef brisket is a cut that we don’t see much in Australia (apart from, as we discussed on the night, in pho of all places) but my god – I will be seeking it out after this. Definitely my favourite dish of round 2, and up there with the pork and chicken from round 1 – (this is what my food blog would sound like if narrated on ESPN). The beef ribs were tougher and chewier by comparison and I probably liked these least, overall, for the night. Granted they’re playing against some extraordinary competition though. If I created them in my home kitchen, I’d be ecstatic.

The potatoes – well, you know I’m a carboholic. Cooked in duck fat? Dusted with salty rosemary? Yes please. In his original review, Kenny pointed out that the sides weren’t traditional for American BBQ – but I feel that you can’t go past roastie potatoes, so I’m happy to leave the quibbles to more experienced diners.

I should point out at this point that the restaurant was full on the night we attended, and Greg said he has been taking plenty of bookings. There’s pent up demand in Port Melbourne for this kind of thing, and the prices are reasonable when you consider that two people would dine very well here, rolling out into the night for around $80. I’m trying to decide whether I still would have been so happy with my meal had I had to fork out for it out of my own pocket – and I’m pretty sure the answer is still “yes”.

Just in and amongst ourselves too, I had a wonderful time at this dinner – thank you for making it happen Kenny! I was nervous on the way – “what if all the others are super-intimidating professional food bloggers” but found a delightful collection of common interests and sparkling conversation at the table. 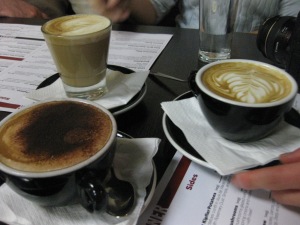 “We’ll have one of each thanks”

We finished up with some of Port Melbourne’s best coffee and complimented Greg on what he has been able to achieve.  I think he should bottle the sauces and sell them at the counter, for a start. I’d take home a litre of that Apple Bourbon sauce – what, it’s a long way now from Blackburn to Port Melbourne!

But I’d return for some more of that American BBQ.