This review covers not one but two occasions at Third Wave Cafe: I ate here with a fellow food blogger a while ago, and Kenny wrote it up more eloquently than I ever could at his awesome western suburbs food blog Consider the Sauce (linked). Therefore, I decided I had to drag Mum back with me for round 2, to make a review on my blog worth it!

And a nod to those of you who haven’t read his writing to head over there and check it out. Kenny has a background in newspapers, writing and sub-editing, so the quality control is high and the writing is snappy. 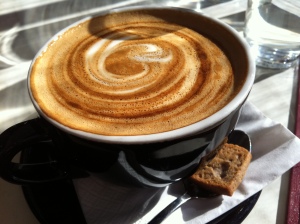 Flat white and little treat – love places that do this!

From the first visit, all I can add to Kenny’s review (where we tried dishes from the Russian-inspired sub-section of the Third Wave Cafe menu) is a picture of my mushroom blintzes below. I enjoyed them – but found the blintzes very rich and creamy.  Good food for a Siberian winter. And, very tasty for a vegetarian dish (wow, that sounds like damning with faint praise! It’s not meant to be, I swear.) 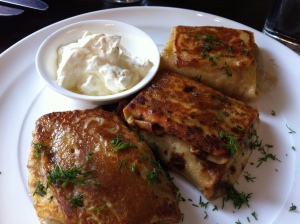 On the second visit, I tried to steer Mum towards the Russian food but she was set on the baked bechamel risotto with cajun spiced sausage (at least I think that’s what the dish was called – the menu on the website doesn’t have it). She liked it – evidence being that while it was a rather large serving of risotto Mum managed to clear the plate! (Not without becoming quite full towards the end…) However, I thought the cajun flavour was a bit odd in the spoonful I tried. She’s more adventurous than I am. 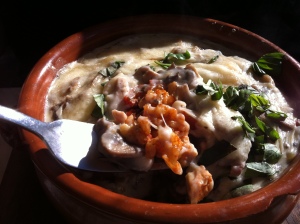 Action shot to show you the inside

I indulged my current passion for baked eggs (as recently begun at Spout Cafe) and ordered the spicy ratatouille baked eggs, which came with slices of chorizo, ratatouille (small cubes of zucchini, eggplant and tomato) and an admonishment on the menu that it was addictive!

It came so hot it was bubbling at the edges and with two chewy crusty slices of Noisette bread. It was oh-my-god delicious, but I couldn’t finish it*.

*On a normal day I probably could have, but I had wiped myself out at end of financial year drinks the night before and the stomach was still… queasy. 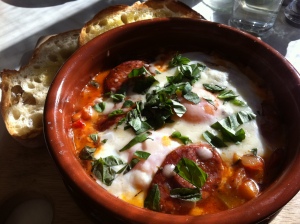 The dishes Mum and I ordered were substantial enough for a lunch, even to the point of being large servings. I felt that we got good value for money and I’d recommend Third Wave Cafe to any Port Melbourne visitors in the area for some interesting flavours and friendly service.

Aside from Consider the Sauce (two visits), other bloggers who have enjoyed Third Wave Cafe include Mel from Mel: Hot or Not (it’s Hot); and Judging your Breakfast who enjoyed the breakfast burger immensely, and makes a lot of great jokes about Port Melbourne locals as well (it’s true! Every time I go, they’re all wearing lycra and walking dogs!).