We only have a couple of months until we have to say goodbye to one of our good friends as she heads overseas to a really good American university, that took a lot of applying to get into, to study her MBA (prediction: she’ll go far). She suggested brunch at Spout cafe and Housemate S and I quickly jumped on board.

Staff were really friendly as the cafe was quite busy but they allowed us to hold a table until our friend got there. Although, I’m sure the cafe would be busier now – since having gone in early June, I have read at least five reviews of this place! I need to get more timely with my blog posts!

Spout serves Allpress coffee. I’m becoming a bit more of a coffee snob the more I have, and just like at Oli & Levy, I love Allpress coffee and really liked my coffee here too. Yum!

The menu is short but interesting and I really couldn’t decide between the shakshuka, an Israeli version of baked eggs with haloumi and tomato, or some other sumac egg dish that I totally can’t remember because of the awesomeness of the shakshuka. The waiter good naturedly helped me through the decision-making process and I’m so glad I ended up with shakshuka becuase it was completely delicious. 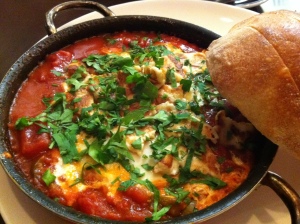 Shakshuka must be Hebrew for deliciousness.

There was a hint of some spice I couldn’t work out in the tomatoes; the chunks of haloumi added a satisfyingly squeaky salty element to the dish; and the eggs were gorgeous and runny. The whole arrived in a cast iron skillet and came with ample turkish bread for slathering or dipping as your fancy takes you.

I licked the plate clean. Well, technically, wiped it with bread, because I was out and about and in company.

You get a choice of bread for the side – this is sourdough! And ample too.

My friends both ordered the homemade baked beans with persian feta. This also looked like a top dish. I’d like to go back and try out more of the Spout menu. So far, only Broadsheet seems to have caught on to the new cafe in Ripponlea’s quiet strip (well, not that quiet, considering Attica is down the road!).

I’d also like to try out making shakshuka at home. Yes, this dish so inspired me that I went home and googled it, trying to work out what that uncommon (well, at breakfast anyway) spice taste was that I was detecting in the tomatoes. For the record, I think it was paprika. Anyway, I was so pleased to find that Deb from Smitten Kitchen has a yummy-looking recipe up for shakshuka, which looks totally achievable… once I get my hands on a frying pan I can put in the oven.