I’ve been raring to go on a post all about all the delicious food Mr Behemoth and I ate while we were travelling around Vietnam/Cambodia*, but I think the sheer  mammothicity – that word’ll be in the Macquarie Dictionary any day now – of the task has meant that I’ve been putting it off and off. Too much story to tell! I’m a classic procrastinator.

Sidenote: go here for all you wanted to know about procrastination and more! And guess what guys, going here is itself an act of procrastination! Yay internets!

One of the key strategies I’ve found to deal with procrastination, especially at work, is to break each task into manageable ‘chunks’ and knock off one of those at a time. So, instead of writing a frickin’ novel about my trip (as regular readers may have noticed, I am prone to get wordy), I’m just going to post all of the photos that I took of food related items and relate a little story to you about each. Are you ready? Get set… go!

Let’s start off with something easy. I purchased these cakes to eat on the train between Hanoi and Hue. Why, you may ask? – other than a love of custard, of course.

Because… the box promised me they were avian flu free. How can you turn down such a claim! And halal to boot! These cover everyone’s tastes.

I don't know about you, but I usually expect my food to be influenza free.

Here’s what the inside of the cake looked like. Gutted that they were in no way as good as the picture made them out to be. Lucky Vietnam Railways provided us with a cuppa noodles for our dinner as well.

Oily cake and sweet sweet custard. Pretty sure this could stay 'fresh' through a nuclear holocaust.

Let’s turn to something more obviously Vietnamese. Here’s our first breakfast in Ho Chi Minh City, at Pho Quynh on Pham Ngu Lao – recommended by our guesthouse in an alley off Pham Ngu Lao as her favourite pho in the area. (Vy Khanh was the name of the guesthouse, and the family are lovely if you want to look them up on hostelworld… that’s how we found ’em!).

Pho bo juuuust before all the herbs, lime, chilli and bean shoots were added.

And here’s a few other phos we ate along the way. Apologies for the lack of Vietnamese diacritics but… I’m too lazy to look up the symbols. 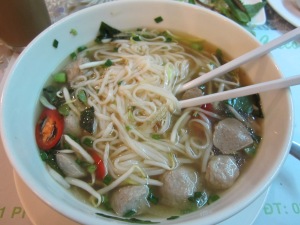 Pho with beef balls at the chain Pho 24. I didn't rate the beef balls, or pho ga, chicken, for that matter. Went back to normal rare beef after this.

We ate things other than pho naturally (and we ate more pho than photographed above, of course). We had salads that were that fabulous combination of sweet, salty, sour, bitter and crunchy, such as a beef and peanut and green mango, or was it papaya, or lotus root salad with just about every meal. However, in one of them… we were introduced to this little devil. I don’t care if you need to hit every type of taste and every type of texture, when my mouth involuntarily puckers and it feels like the ability to taste is being drawn out of my flesh… your fruit is too bitter.

Bitter melon. This. Is. Vile.

We also tried fruits we’d never eaten before. I still can’t remember if this is durian or just some giant melon thing, and the plum apple (potentially not its real name) was average. Dragonfruit, too, has all the looks and none of the flavour, and it’s available in Melbourne too if you’d like to test my assertion.

This tree has testes. Pluck the low hanging humorous fruit, people, that's what I'm about.

This tree was in the garden of a family restaurant we ate at in the Mekong.

Thank god for coconuts, mangos, mangosteens, rambutans, and all the other oodles of tropical fruit we ate.

Floating markets in the Mekong - anyone for a coconut? Bicycle not included.

It wasn’t all eating Vietnamese either. I like to sample the local McDonalds variant in each country that I go to. In India I rather enjoyed the aloo tikka burger (potato patty, tikka sauce). Now, Vietnam doesn’t have McDonalds… but it does have KFC. Behold: the rice menu.

We overheard someone on the train saying they'd only eaten KFC the whole time they were in Vietnam. What a joyless existence.

This post is getting far too long. I’m going to call it here, and devote my next post entirely to the food and activities I did in Hoi An, because I have too many good photos of delicious and authentic Vietnamese food and it deserves a post to itself. In addition, if you’d like to read my previous posts on our trip, a do’s and don’ts post which turned into a series of book reviews, and a post all about Tet, the Vietnamese Lunar New Year, click click clickety click.

Not Quite Nigella has also recently visited Vietnam, and I’ve been enjoying reading about her experiences here (there’s a series of posts but you can follow the links).

I appear to have not taken any photos of food in Cambodia (or any without mine and Mr Behemoth’s mugs in them anyway). Amok was eaten, lok lak and a variety of other Khmer dishes. I didn’t get sick once on the trip… except in Cambodia. But that could have been due to eating temple food at the Angkor Wat outdoor places; or potentially the bag of sugarcane juice our lovely tuk tuk driver bought for us. Anyway it wasn’t bad sick (which I define as throwing up). I’d eat everything I had that day again, because it was delicious.

If you’d like to know more about Cambodian cuisine and culture, may I point you to this blog: Phnomenon. Not only does it have the best blog name ever, it has quality writing to back it up. (The writer, Phil, who’s based in Melbourne now, puts together The Last Appetite, a wider-ranging food blog). In addition, Dave Plus Food just visited Cambodia and fell in love with the country just like I did. His post is a great read.

Like Dave, I’ll finish with a gratuitous shot of Angkor Wat.

Because why wouldn't you cover temples with your face, if you were a king?

2 thoughts on “Travels in Indochina: memory card full, or the tale of too many food photos”

There was an error retrieving images from Instagram. An attempt will be remade in a few minutes.