EDITED TO ADD: Well, this is a quick turnaround – I’d posted the following review on a Wednesday or Thursday, and at the same time unbeknownst to me, our PA was booking a leaving lunch for a friend on the Friday at China Red! So… somewhat reluctantly…. I went back. But this time I enjoyed it. I shared dishes with three friends (non-vegetarian) and can recommend the xiao long bao (not tough at all! and the soup was delicious!) and the sizzling chilli beef with water spinach (just the right amount of fire for my friends, I could probably have a little more heat but it was pretty good). The only downside is that we ordered pork buns expecting char siu but got plain pork in the white dough. Our menu reading at fault there, I think.

On the whole, it was a much better experience this time. I’d now go as far as to recommend China Red, as long as you order carefully (and get the xiao long bao).

I’d heard about this mysterious dumpling restaurant where you order off touchscreens from the cronies at work, but didn’t know anything else about it (such as, it’s a sibling of Hutong, which I learnt from I Eat Therefore I Am’s review). Ordering off touchscreens sounded like something I’d like to try next time I had dumpling cravings though, so when my friend and I were looking for a quick bite to eat before heading to see Royksopp at the Palace (food for the ears!), China Red popped into mind.

When you get there, they ask you if you’ve been before. We said no, expecting a long-winded explanation about the touchscreen, the process, etc. but refreshingly the waiter was succinct in his explanation: “Press dish, press yes, NO CANCELLATIONS!”

O-kay then. We think we’ve got this. Anyway, we only wanted a smallish dinner, and my friend is vegetarian, so we scroll through the menu (below). 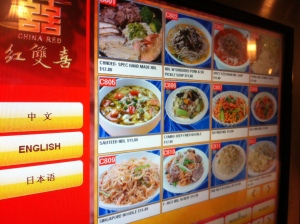 No cancellations! Touchscreen at China Red

I’m sad to report that the dumplings were not the best. Sure, it’s hard to really stuff dumplings up. But the dumpling skins were thick, tough and chewy, and the pork ones tasted like they had been steamed hours before. Maybe we came on a bad night? Now I know it’s a sister of Hutong, I’m even more disappointed in them! The pork dumplings too, repeated on me for hours. HOURS. I was dancing… and burping. 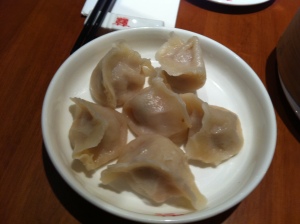 The vegetarian dumplings were much better. The filling was a nice mix of veg and chopped up tofu, and I liked the green colour of them. However, the skins were still tough and stuck to our teeth (but not in a good way). I’ve had better dumplings at David and Camy (and Shanghai Village, and Hutong, and…).

All in all, we were not impressed. 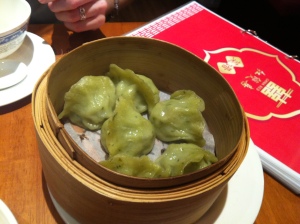 Positives though: the decor of the restaurant is really nice. Oh, look, there’s more positives than that:

Final positive, and possibly the greatest of all: if you’re anything like C and I, the touchscreens will spark conversations like:

“Do you think humans will all be replaced by robots one day?”
Leading to speculation on whether you could continue along this technology bandwagon to completely take out the hospitality staff and have food delivered by conveyor belts to the table (dismissed as unlikely).
You may then move on to considering at what point the machines will realise they need to protect themselves from being unplugged, and as a tangent to that, explore your beliefs that the Director’s Cut of Blade Runner is far, far better than the original with voiceover (table unanimous).

It’s quite the conversation starter.

I’ve heard good things about the larger dishes here, but on the whole – would I go back now I’ve tried out the novelty screen? Probably not, based on this experience, unless I was going in a group that really wanted to go. If I did, I’d try different dishes such as the xiao long bao and some of the stirfries.

Other bloggers that have been to China Red include Because I Can’t Cook, who also thought the dumplings were average; Nouveau Potato, who enjoyed the vegetarian dishes (must have had the dumplings on a better night!); and Foodie About Town liked the experience.