…unless you’re my housemate G, who was quite happy with my initial attempt at these gingerbread men because I had used old, impotent dry ginger expiring in 2006. BORING! Unfortunately for G, I’m trying to perfect these little buggers because I want to give them to Mr Behemoth’s family as a Christmas present in lieu of buying them an actual gift. Particularly, I want to impress Mr B’s mum, because although it is probably un-PC to say it, I have a sneaking suspicion she just wants to be reassured that I can cook for her son. Every time we go over there, she sends him home with a cake (hey, I’m not complaining!). The man can and does cook quite well for himself (and me), but I think mothers will always be looking out for their little boys…

Luckily for me, Mr B hasn’t bothered to tell her that last time I cooked him something with chilli in it, it clumped together somehow and he ended up getting it stuck in his throat and hacking it into the kitchen sink while making frantic motionings for a glass of milk, while my housemates and I looked on in horror. Yeah. That was unfortunate.

Anyway, I digress – this gingerbread recipe has been tested a couple of times now and seems pretty foolproof. I substituted just about everything the first time (our share house pantry could be better stocked, let’s put it that way) but the next time when I actually had brown sugar, new ground ginger, new cinnamon etc., I got gorgeous, slightly chewy, spicy gingerbread men, trees, stars and angels. And bonus! The recipe makes its own icing! (By that I mean you don’t end up with yolks/whites left over, a constant annoyance of mine). 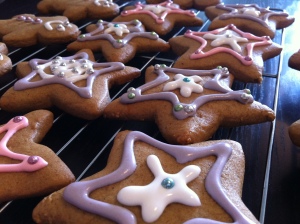 Gingerbread men (adapted from a recipe from Taste)

Preheat oven to 180°C. Brush 2 baking trays with melted butter to lightly grease. (I used baking paper and greased that because our trays were manky)

Beat the butter and sugar in a bowl until pale and creamy (I used a hand mixer). Add the golden syrup and egg yolk and beat until combined. Stir in the flour, spices and bicarbonate of soda. Turn onto a lightly floured surface and knead until smooth. Press dough into a ball. Cover with gladwrap and rest in the fridge for 30 minutes. 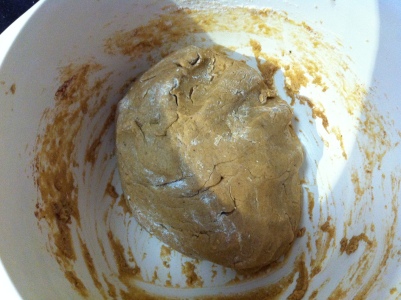 Meanwhile, place egg white in a clean, dry bowl. Use an electric beater to beat until soft peaks form. Gradually add icing sugar (watch out at this point, you may not be as unco as I am but I didn’t realise the wind of my beaters would blow the icing sugar away from the bowl and all…over… my….bench) and beat until stiff peaks form. At this point you could add food colouring if you like, and cover with plastic wrap and put it in the fridge.

Place the dough between 2 sheets of baking paper and roll out until about half a centimetre thick. Use a gingerbread man cutter to cut out shapes. Place on trays about 3cm apart. Repeat with any excess dough.

Bake in oven for 7 minutes or until brown (depends on how thick you made ’em, and and how long your oven’s been on, too. Some of my later ones I only left in for 5 min). Remove from oven. Transfer to a rack to cool.

Dollop prepared icing into a snaplock plastic bag and cut a small hole in a corner of the bag. Pipe over to decorate. I used silver cachous for buttons.

I took them to work to try them out on a test audience and feedback was excellent. Give them a go, super easy and my housemates polished off the leftovers within days. I’m contemplatng adding really small chopped up pieces of crystallised ginger to them as well, but I’m not going to do it for Behemoth MIL – I mean, what if she doesn’t even like ginger, after all? :-O

Psychedelic gingerbread stars, a.k.a. using up the icing